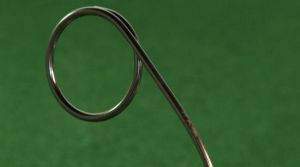 A top-bottom joint was a tool that consisted of two parts… you guessed it – the top and the bottom, more specifically a metal rod bent to form a circle (the top) and a long guitar string or some other thin wire (the bottom).

The top-bottom joint is one of the most well-known tools used to defraud casinos. It was very popular in the 70s and 80s. It took the term "emptying out a slot machine" to an entirely new level.


Monkey paw was created by a legend of the art of cheating slot machines and casinos – Tommy Glenn Carmichael. But to get to the monkey paw, we first have to go back to the top-bottom joint. Carmichael owned a repair shop that wasn’t doing very well. So, when his friend Ray Ming introduced the top-bottom joint to him, he decided to try it out.

He had some success, but was later caught and sentenced to 5 years in prison, not only for this fraud, but also for previous charges. He concluded that the tool he had been using was already well known. He then realised that he had to find something new in order to succeed in the field of casino fraud.

That’s why he invented the monkey paw. He got himself a video poker machine and began experimenting. Carmichael managed to create a very simple yet functioning contraption. He attached a metal string to a bent metal rod, which he later inserted into a slot machine’s vent and moved it around until he found the switch for the machine’s coin hopper. He pulled it and got everything that was inside the machine.