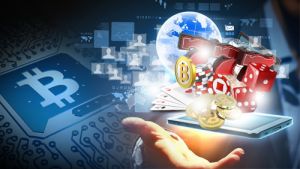 Bitcoin Casinos: Players Were Betting $4,000 Worth of BTC Every Minute in February 2017

No doubt, Bitcoin has got a bright future on the online gambling market. Taking into account that many casinos has already turned to the cryptocurrency, this is just a matter of time. It turned out that casinos which accepting Bitcoin recorded $4,000 worth of BTC being wagered every minute in February 2017.

Casinos accepting Bitcoins have a number of competitive advantages in the industry. Traditional payment systems constrain casino development due to their high fees and limited access to the financial tools. Bitcoin, in contrast, was made to make financial tools available worldwide without any need for permissions or control from states and banks.

This is only one of many reasons which has made bitcoin casinos so popular lately. Though the number of such casinos is still limited, the platforms accepting Bitcoin are rapidly growing.

Statistics indicate that more than 35 bets in Bitcoin were made every second. Considering the fact that Bitcoin is a 9-years old currency, this is an evidence of sufficient growth. These figures were recorded between February 1st and March 1st of 2017.

To be exact, all casinos reviewed by Bitcoin Strip have registered 848,05 million bets so far. These bets add up to 2,93 bitcoin wagered every minute; that’s where the number $4,000 origintares from. The total value of bets made in February 2017 is 117,971 bitcoin which is a surprisingly high ;in the same time it signifies another advantage of the cryptocurrency as the average bet was just 0.00013911 BTC. Unlike credit cards and other traditional payment methods, Bitcoin is perfect for micro bets.

As can be expected, investors also make profit from all this betting. Total income recorded in February 2017 was 169,7 bitcoin or $200,000. One can say that this figure is nothing compared to traditional betting profits, it shows that bitcoin has earned its place in gambling industry. Bitcoin casinos are gaining power and it seems to be a forgone conclusion.

Obviously, bitcoin casinos will become standard in the future. The cryptocurrency and gambling were made for each other. This sector will be developing over the coming decades. Probably, bitcoin won’t completely replace traditional payment systems in gambling but this is a payment method to be considered by every casino operator sooner or later.