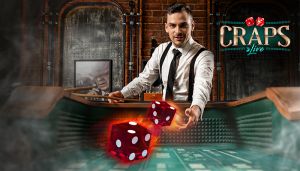 online casinos in Australia offer players the opportunity to experience the fun of real gaming while they are in the comfort of their own home. Many casinos include a separate live dealer games section where players can play games such as poker, roulette, baccarat, and blackjack. These games are hosted by real croupiers and streamed in real-time.

Playing at a live casino is a great way to experience the thrill of playing at one’s convenience. Even though there are can be several live games at an online casino, until now, the game of Live craps online has never been offered.

In order to make the game of craps live for online players, Evolution Gaming has launched ‘Craps Live’ for players who love dice games. Australian players who like playing craps can now play Craps Live at real money casinos and you can find a list of the top casinos we recommend on our Evolution Gaming page.

What Is Craps?
It is believed that Craps was created by Roman soldiers. Nevertheless, some studies claim that Craps was an Arabic game. A few decades back, craps became popular amongst players in England and France. It was also referred to as the Dice Game.

The best thing about craps is that it can be played without any complicated tools. As the craps game began to develop, its rules started to change as well.

The game did face some issues in the beginning because of the unfair use of the dice. However, John H. Winn, a famous dice maker, made the craps game fair and easy for the players. He created a few rules too and controlled the use of unfair dice.

Online craps require the players to place bets. Evolution Gaming has not made many changes in the Live Craps games. Players who are new to playing craps can use the help of online guides like the one on our site, online craps rules that include detailed information about the gameplay and how bets are placed.

Evolution Gaming is a popular developer and well-known for its live games. Live Craps is the latest addition to their games selection. At present, Evolution Gaming has launched a basic version of live craps. However, they claim there will be different types of versions of live craps for players in the future.

Live Craps by Evolution Gaming comes with an attractive look. It includes a mechanical arm that works to throw the dice. The croupiers work to reload the arm with the dice. Even though the players will not be able to touch the dice and throw them at their own speed, Evolution Gaming has included the option to change the strength and speed of the dice.

There is a ‘number feature’ that lets the players choose their best number and place a bet on them at a push of the button. When playing craps online, you will be able to see other players playing with you.

Live Craps is Mobile Compatible
Live Craps can be accessible on your personal computers and mobiles. Players who prefer playing on the go will be able to enjoy live craps at mobile casinos that offer Evolution games. Live Craps is streamed flawlessly on mobiles and looks perfect on the mobile screen, thanks to the technology used by Evolution Gaming.

The Rules of Craps Live
Craps TableIt is easy to play live craps as the rules are simple and straightforward. Players start by placing bets on the outcome of the dice. The bets are usually played against the casino and not against the players.

The main objective of playing craps live is to guess the results of the dice. Players who predict correctly will get a payout, depending on the placed bet. There are several terminologies in craps that players must learn to play the game and win.

The player who throws the dice is known as the shooter. Three results of the thrown dice determine if the player wins or loses. The first result is natural; the second result is craps, and the third result is the point.

What Are the Betting Options In Craps Live?
There are several betting options on the craps table. If you are new to craps, you must know about the options when playing craps. There are popular bets such as Pass Bets and Don’t Pass Bets. On the craps table, two areas are written as ‘Pass Line’ and ‘Don’t Pass.’ The players will be able to place bets on these options. You will also have options to bet on Come and Don’t Come bets.

Pass Line: It is the simplest bet that lets the players place a bet on the prediction if the outcome is 7 or 11.
Don’t Pass Line: It is the opposite of the Pass Line bet. This bet is made against the shooter.
Come Bets: The player who places the win bet wins when the shooter receives 7 or 11. He loses when the shooter receives 2, 3, or 12.
Don’t Come Bets: It is the opposite of the Come Bet and the player wins on 2 or 3. There is a tie on 12.
Odds Bets: These are called side bets and can only be placed after the players have placed one of the above-listed bets.
Play Craps Live at Australian Online Casinos
Players who like playing the game of dice will be excited with the launch of live craps by Evolution Gaming. Craps is a thrilling game that keeps players entertained.

Evolution Gaming is a reputed gaming platform and famous for its live games. Since live craps games are now available at Australian online casinos offering Evolution games, players can visit the casino and experience the fun of live craps.