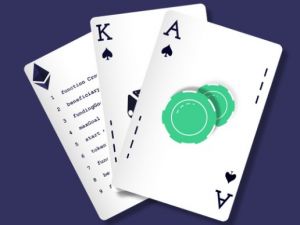 The gambling industry is rapidly growing (valued at $45 million in 2016) but it has one major problem: bet transparency. As of today, many casinos are still not fully transparent towards their players. Moreover, it is really hard for a casino to prove that it doesn’t cheat on its players. It creates a number of problems for online gambling platforms and casts a shadow over the whole industry.

Tomas Draksas, Edgeless.io co-founder, professional gambler, and poker player, says there is no way to check what happens at casinos' servers and what operating principles they follow. Casinos can easily turn any dispute to their advantage. Edgeless.io team is willing to change that using blockchain. They want to allow any player to conduct independent audit and make sure that the game is really fair and the casino has no edge over the player. It is really scary how easily casinos can conduct rigged games. It takes only a few changes in the program code for a casino to get access to the payout of a game.

Tomas Draksas believes many casinos abuse their power over a player. Casinos should be decentralized to improve the quality of the whole industry.

Tamas Draksas adds that Edgeless is one of the few decentralized casinos. The development of the project started in the past year. The team consists of blockchain and gambling experts from Germany and Lithuania. You can find more information about them on the official website.

Tomas Lukosaitis, Edgeless Co – Founder, says their casino will be profitable due to players’ mistakes only. Players will need their skills and a bit of luck to win, like in BlackJack or Russian Poker.

The developers have already released their first slot machine based on Ethereum. According to the Edgeless representatives, its success inspired them to create first fully-transparent 0%-edge online casino.

Draksas adds that Edgeless is based on Etherum blockchain allowing them to use smart contracts which can be checked by any player. Traditionally, casinos offer ‘fairness check’ which can’t stop them from cheating because they still can do a lot on their server level. Blockchain and smart contracts provide total transparency so the players can be absolutely sure that nobody is trying to fool them. Edgeless is planning to release more games and sports betting which will be fair and transparent as well.

Let’s note that Edgeless.io casino is going live in the coming months. Before that the company is planning to raise funds through ICO (Initial Coin Offering). The investors are offered to purchase EDG digital tokens which will be in-game currency and a proof of membership. The EDG holders will be granted an access to the monthly lottery to win 40% of the company’s revenue during the review period.

Ignas Mangevicius, Edgeless co-founder, blockchain-based systems developer, Etherpokies founder, said “We are breaking new ground here with member benefits. Our engineers have worked hard on a Game of Profits-lottery that is open for all our token holders”.

Tomas Lukosaitis explained that a special smart contract will be opened for the participants to send their tokens to participate in the lottery. After the lottery is finished, they will be offered to recall their tokens or take part in the next lottery automatically.

The ICO will start on 28th of February 2017, 3:00pm GMT. The main goal of the campaign is to raise at least 36,000 ETH. More detailed information about the ICO is available on the project’s website.
You can visit the official forum discussion or the company’s blog to learn more about the project.