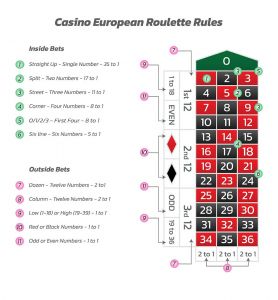 Differences in European, American and French Roulette rules and odds

Besides that, there are no major differences between the games. The differences in single and double zero roulette bets exist due to the extra zero (00) in American roulette. There is a special bet called top line in American roulette, which covers the numbers 0, 00, 1, 2 and 3, while the bets called trio (0-1-2 or 0-2-3) and basket (0-1-2-3) are only available at European and French roulette tables.

In addition, French roulette is usually played with a La Partage rule, which modifies the RTP of some bets even further.


Differences in European, American and French Roulette rules and odds 0 5 0