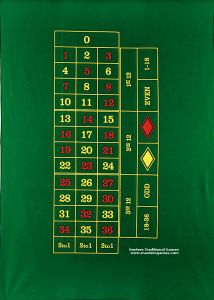 This is a more complicated variant of the "La Partage" rule. Here, instead of half of the bet being returned to the player, each bet remains on the table after the ball has landed on 0. The dealer places a marker, which signals that the bet is "in jail".

The bet is then evaluated in the next round. If a "in jail" bet wins, the original bet is returned to the player. Otherwise, the player loses the bet.

For example, a player placed a bet of €100 on black and the winning number was 0. Therefore, his bet was placed "in jail". If, in the next round, the ball lands on a black number, this means that the €100 will be returned to the player.

Therefore, the 'La Partage' and 'En Prison' rules work out more or less the same in the long run, however, some players prefer 'La Partage', while others appreciate the added rush of 'En Prison'.


While the previous two rules are used for the French and European variants of roulette, the "Surrender" is used specifically as part of American roulette game.

It is basically the same as the "La Partage" rule, but applies to both 0 and 00. If the ball lands on one of these numbers, half of each outside bet is returned to the player.