No Wallets, No Internet: Fully Anonymous Cash of the Future

Why We Use Cash

Cash is money as it is; in other words, it is the most liquid form of goods, not just a commitment to grant some goods. A cashless payment is a promissory note repaid in cash.

Cash transactions cannot be tracked down; they are anonymous and decentralized. They don’t require participation of any third party and, unlike a bank account, can’t be frozen. They don’t require any additional equipment as they take place through the transfer of items known as cash. Such items can be transported independently and without the knowledge of third parties even across the borders.

Thus, cash is good. Now we got to figure out if the modern bank notes can still be called cash.

The answer ‘Yes’ seems obvious. A bank note is an object we use for anonymous decentralized transactions without the usage of additional equipment. Such transaction can’t be tracked down if, of course, these are not marked bank notes. In the same time, it is obvious that modern national currencies are based on debt which is somewhat different from how it used to work in the past.


Cash Is Not the Same It Used to Be


After the ‘Nixon shock’, when the direct international convertibility of the United States dollar to gold was cancelled, the debt nature of bank notes hasn’t gone, their emission is still reflected in banks’ liability. At the same time, the bank notes have officially become cash: the prices are given in them, not in gold; they serve as a medium of exchange, a store of value, and the world money.

In terms of the monetary economics, cashless economy is not the economy without cash. It is the economy where bank records are used as cash. Once bank notes evolved from cashless money to cash; now bank accounts will evolve from the promissory notes issued by banks repaid in paper money to cash and paper money will be eliminated.

The Nixon shock has resulted in a fundamental change of essence of cash; things which value was independent of the will of monetary authorities turned into things which value is fully dependent on this will. The transition to the cashless economy promises serious cash nexus metamorphosis as well, that’s why it is important to start looking for alternatives right now.


Bitcoin – Cash of the Future?


According to the bitcoin whitepaper heading, it’s ‘a peer-to-peer electronic cash system’. Like cash in cashless economy, bitcoins exist only as records in the electronic data base which are not committed to be repaid. But cashless economy is only a theory and bitcoin became reality 8 years ago.

The main difference between bitcoin and modern national currencies, from the perspective of economy, not technology, which doesn’t let us equate one with another is not its digital nature. Decentralization, lack of legal payment status, blockchain, emission algorithm are not that important as well. Decentralized private fiat money on blockchain with limited emission stay fiat.

The main difference between bitcoin and modern national currencies is that bitcoin can be used not only as money today. Bitcoin is not a useless piece of paper or a record on a hard drive, which can be nothing but a legal means of payment. It is an item which is useful because it can host any bond paper or a token granting access to the most secured blockchain on the Earth. Probably, national currencies will be somehow useful in cashless economy as well, but, unfortunately, what we see is what we get.

Despite of the above-mentioned advantages, bitcoin is still not perfect. Bitcoin transactions can be decentralized but, unlike paper money, they require additional equipment to be processed. Like a bank account, a bitcoin address can be frozen: miners can agree not to process transactions for this address. However, the address owner can become a miner himself but the other miners can agree not to process any transactions from his address. The more miners are centralized, the faster they can agree.

You don’t have to identify yourself when opening a bitcoin address like you have to do if you want to open a bank account but it doesn’t mean there is no way to identify which address belongs to you.


Bitcoin Is Not Anonymous


It's not a secret that bitcoin transactions are not anonymous. They are pseudonymous and recorded in global public blockchain which allows such services as Chainalysis, CoinValidation, and Elliptic to make this pseudonymity very fragile.

Common mixers, according to the creators of «Bitcoin and Cryptocurrency Technologies» course, can’t guarantee untraceable transactions. Not only the academic researches but also, for instance, Blockchain.com blog notes:

"If you do want to make you transactions untraceable, Shared Coin and other implementations of CoinJoin are not your choice.."

Of course, the arms race is going on and such solutions as MimbleWimble and Mixcoin may change the situation but currently the odds are against the anonymity.


Off-chain solutions ensure privacy decreasing tracks in blockchain. For instance, Lighting Network records only transaction which opens payment channel and closes it. In this case, using a blockchain browser it is possible to get information about the addresses between which the channel was opened, the date of opening and closure of the channel and initial and final balances on both sides of the channel but not the information about the transaction itself.

You don’t have to open a payment channel with everyone you want to send money to. That would make you depositing many bitcoins in the channels and pay a lot of fees; that’s unprofitable and unhandy. It’s just enough to have a route of channels between you and the receiver. For example, user A can pay to user C without opening a channel if there is a A – B – C route; in other words, there is some intermediary B who has channels with users A and C. This is how the intermediary business in Lighting Network works: they invest bitcoins in payment channels and earn of the fees for each transaction.

The intermediaries make Lighting Network handier but less private. It is possible to concentrate and centralize funds in Lighting Network as well. Hubs which invest large amounts in payment channels can collect information about their clients and, like miners, agree on blocking of certain addresses from black lists.

There are several anonymous solutions like Bolt and TumbleBit being developed for off-chain transactions but they haven’t been implemented yet.


It is time to bring intermediate results. Bitcoin is not anonymous. So-called ‘anonymous’ cryptocurrencies are not an option. The problem is not in the probability of a bug in the code or a developers’ conspiracy. The development of deanonymization is not a big deal as well. The main risk is that ordinary bitcoin has become legal but fully anonymous cryptocurrency transactions are likely to be forbidden which will lead to a number of legal and economic consequences for their holders.

It means, the only option is off-chain transaction in a pseudonymous cryptocurrency. The less tracks the transaction leaves in blockchain, the higher the privacy is. Lighting Network transactions leave less tracks and they are trustworthy but the intermediary question remains. Moreover, such transactions require additional tools and Internet access which means more tracks.

It seems that the best way to ensure your bitcoin transaction privacy is not to process them via the Internet, not to have a cryptocurrency wallet and not to use Internet at all. The funny thing is that it is possible.


Private Keys as the Anonymous Cash of the Future


It is not necessary to transfer bitcoins to receiver’s address to send them to him. It is enough to give him the private key to access the address with the bitcoins. The key is not a promissory note; it is the means to achieve access to the bitcoins. The bitcoin wallet stores not bitcoins but the keys and these keys can be easily sent both online and offline without any fees.

The transfer of the key offline doesn’t require any transactions to open/close payment channels, additional equipment or Internet access. The transaction is processed through transfer of the item which, particularly, allows to use ‘clean’ bitcoins without losing their ‘cleanness’. The bitcoins are called ‘clean’ because the only transaction record where they were used is coinbase.

You may say that you need Internet access to check the bitcoin wallet balance and the correspondence of the key to the address. The answer is following:

Firstly, any generator of physical bitcoins like, for example, BTCC will hardly risk with its reputation and provide loopholes for its employees to steal 0.1 bitcoin from you. Still, one fine day BTCC may use all the keys they have for their own profit and it is a risk. 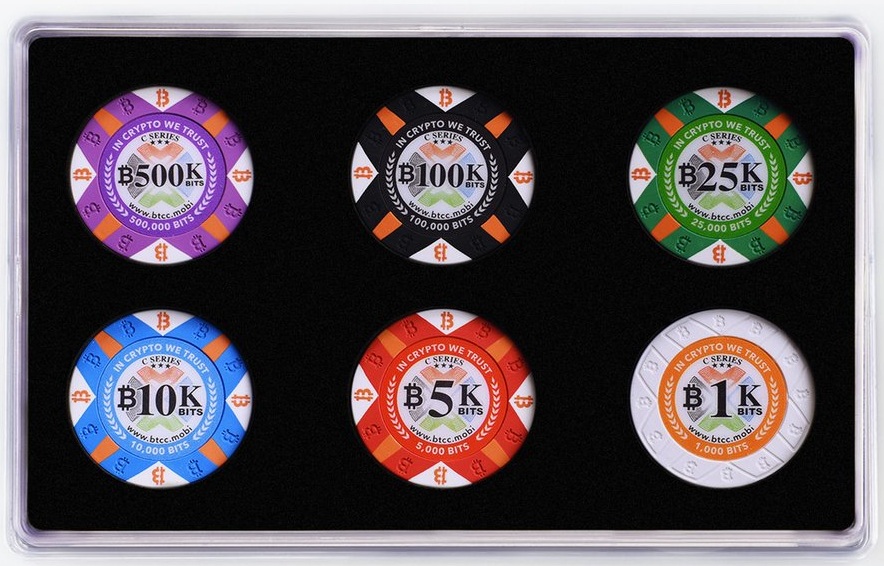 Fortunately, there is a trustwotrhy solution from Opendime, but you have to be able to tell a fake and trust the sender.

There is nothing unusual about such trust. We never check whether modern bank notes comply with all degrees of protection when accepting them. Even gold coins were not checked at every deal. A coin as an ingot of standard size marked with a stamp of a trusted issuer was created to make exchanges simpler as it was not necessary to check it at every transaction.

It is possible to counterfeit paper money, gold coins, and even bitcoin. This is an endless arms race between fair issuers and forgers. Bitcoin is not protected by any state that’s why it is less trustworthy compared to national currencies. In the same time, any state can fight against bitcoin forgery the same way it fights against any other kind of forgery.

Secondly, the usage of Internet to check the bitcoin wallet balance and even the private key validity is not the same as the usage of Internet to process transactions with Lighting Network. When sending ‘physical’ bitcoins you don’t have to check Lighting Network code and Internet connection reliability. Moreover, you don’t need a bitcoin wallet which is especially important speaking of the coming tightening of KYC requirments to wallet providers and exchanges.

Therefore, good old cash with all its advantages won’t die in the future. Bitcoin is a kind of digital cash and ‘physical’ bitcoin recorded as a private key is analog cash of the future.


No Wallets, No Internet: Fully Anonymous Cash of the Future 0 5 0