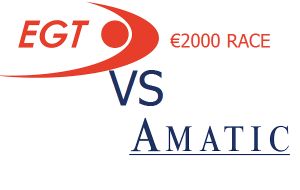 Hey guys, it’s TTR. So I decided to run a little competition for slotrunners.com users, the sponsor will be TTR Casino.

The rules are pretty straightforward. There are two old school software providers in my casino, EGT and Amatic, and by the way Amatic was, so to speak, forefather of Novomatic and was founded earlier, but this story is for a completely new topic and I will talk about this someday in the future.

Anyways, the battleground, as I mentioned above, is TTR Casino. Two old school software will clash in a battle with each other. EGT is in the left corner of ring and Amatic in the right, Austria vs Bulgaria! :D

I have allocated €1000 of prize money for each of these two software providers (€2000 in total). All you need to do is to play at TTR Casino in the next two weeks in the pokies of one of these two providers and post screenshots of your biggest multipliers relative to the bet size!

The screenshot should be posted not more than 6 hours after spin was made.

If someone still doesn’t understand, there will be 2 prize pools, each of €1000, one for EGT and one for Amatic. Players can post screenshots for both, EGT and Amatic, so the same player can win in both competitions simultaneously and the maximum number of approved screenshots from one player will be two.

The software which will have the biggest multiplier, will be having it’s own competition later.

All prizes will be credited directly to the player’s account without any wagering requirements and will be available for withdrawal.

Any currency can be used to participate in this competition, but I would like to ask players to post screenshots only in English, if that’s possible. Also, only screenshots with maximum possible lines played will be accepted (to avoid possible abuse of competition). All screenshots will be checked for validity in the history of bets.

So, let’s go! Any TTR Casino player can participate, you only need to register at slotrunners.com, which can be done in a seconds with social network login (facebook, twitter).