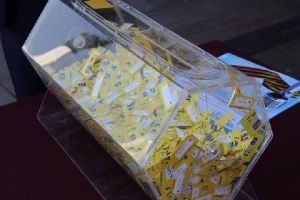 Spherical Slot in a Vacuum - Part 2

In the first part we came to a conclusion that there is one static drum in our slot. Let’s specify all possible outcomes as N. Don’t forget than N refers to a very large number. We have also developed our paytable and paylines which determine the RTP of our drum, and added RNG which randomly and autonomously generates numbers by the 1 / N formula.

How can all these things work together? You are absolutely right, this is a lottery drum, a transparent box (we will be referring to it as to LD to avoid any confusion); one can spin it to mix lottery tickets inside in a random order. Our “N” pictures will be those lottery tickets. All we have to do now is to load them into the LD. A player pays us a coin and we give him a lottery ticket from the LD in return. Its the RNG which loads the LD with the lottery tickets.

What do we need the RNG for?

Let’s load our LD with N tickets and sell one for 1 coin. When all the tickets are sold, we will get our profit according to the RTP. Than load the LD with a new portion of N tickets. We can make it more complicated so no one would guess how our LD works; load 10N tickets, as soon as N tickets are sold, load N again. Repeat until all tickets will be sold out.

Consider a dice. Imagine the dice to be an extremely simple slot machine. 6 faces of the dice = 6 images numbered from 1 to 6; N = 6. Load the first LD with all 6 tickets (1, 2, 3, 4, 5, 6); the second LD will be controlled by the RNG; the odds for the first ticket are 1/6, for the second – 1/4, third - 1/3, etc. Frist of all, that’s wrong, there should be the same odds for each ticket. The second thing, it is potentially dangerous for the developer itself; if somebody knows which tickets are out, it won’t be hard to predict remaining tickets and make good money with that. Which ticket can be the next in the second LD? Nobody knows. There can be 6 same tickets in a row or all different tickets. In fact, the RNG is a kind of LD with N tickets; we take out one of them randomly and put it back (in other words, we take out a ticket, put it back, shuffle all of them, and repeat).

Now, let our RNG load the LD not with 6 tickets but with 6 million tickets. How many tickets of a kind are there? As you all know, if you are throwing a coin for a long time, the number of heads and tails will be approximately the same. This pattern works for the RNG as well. All we need to do is to generate 1 million outcomes with the RNG and take our the percentage which will be brought to us according to the RTP.

At the same time, we don’t cheat on anyone, we don’t use “adaptive math”, “money pool”, etc. The odds are the same for any “picture” to appear on your screen which is compiled with the stated RTP.
Some of you might have noticed, speaking about the RTP or “lottery tickets purchase” we assumed all bets were of the same size. But in real life people play with different bets in different currencies!

It is important to understand the slot doesn’t care about the bet sizing, whether a player changes the bet or not. The slot accepts the bet as 1x, generates the outcome, checks it with the paytable and pays it out as 0x, 1x, 10x … 100x, 1000x, etc. Finally, this outcome is multiplied by your real money bet.

Many players mistake the RTP for payout ratios. The RTP is considered for a particular bet. All bets are considered as the same bets to simplify it. The payout ratios show ratio of all bets made on a slot to the payout of this slot in a limited period of time. You can lose $100 with $1 bets and win $10.000 with a single $100 bet getting 5000% payout but this has nothing to do with the RTP.

In a long run the slot will collect the whole possible set of combinations and make profit according to the RTP. It just takes time.

That’s why all slot providers deal with major casinos or casino networks only. They have many players and it doesn’t take that long to collect the whole set of combinations. A smaller casino may get into trouble if someone gets crystals in Space Wars with a $400 bet and cashouts leaving a big hole in the casino's budget. If the casino doesn’t have many players who can bet $400 or more, it is a big deal.

To sum up, it is because of the RNG (which follows the laws of maths) the slot in a long run (a colossal number of spins made by all players) shows the same distribution of all outcomes for any possible bet, in other words it makes its profit without any need for cheating.

A particular player will never make so many spins; he sees only few of millions/ billions/ trillions possible outcomes.

In fact, the things are not that bad. Otherwise, there wouldn’t be so many hypotheses about pools, hot/cold pokies, etc.

In the next part I’ll consider the whole matter from the developer’s side and possible conclusions from that. I’ll also reveal a strange thing about the whole theory if you haven’t noticed it yet.