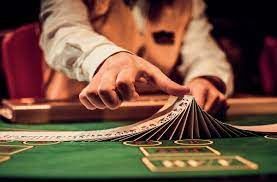 Here’s the truth about professional gamblers: They don’t gamble the way you do.

Not only are they more knowledgeable, more skilled, and more disciplined, but they consider things that wouldn’t even occur to the average recreational gambler, even the ones who are serious about winning more often.

Here are some of the things they do that you wouldn’t even think of.
The average recreational gambler might go play video poker over a weekend and think he’s doing really well by keeping a log of his play. He might know how many hours he played which game. He might even know his win amount or loss amount.

But professional gamblers are more interested in averages than they are in actual results.

This ability to think in terms of averages in addition to actual results is one of the differences between professional gamblers and skilled recreational gamblers.


If you’re dealt 3 or 4 cards to a royal flush, and you miss that royal flush by a card, this counts as a scare. Some video poker players also call these 80-percenters because you have 4 of the 5 cards you need to get your royal flush.

That video poker player might get 2 scares in a day. Instead of feeling like he’d lost and being frustrated, he just realizes that he’s “up” 40€ and that much closer to his eventual royal flush.

Of course, he gets less excited when he gets his eventual royal flush. He doesn’t count it as 1000€, either – he counts it as that 20€ average.

This is a great mindset for keeping a cool head while you’re gambling and not getting rattled by wins or losses.


Most real professionals are eager to learn but reluctant to teach. They think that the more people you teach, the tougher the casino games become.

To an extent, this is true. Casinos put more countermeasures in place and use tougher rules when they want to thwart certain types of advantage players. The fewer people who take advantage of an opportunity, the longer that opportunity tends to last.

An average gambler who learns a technique for beating a game can’t wait to share what he’s learned.


Many recreational gamblers don’t give much thought to the size of their bankroll, nor should they. After all, if you’re playing with a disadvantage, you’d need an infinite bankroll to avoid going broke.

Some would-be professionals think about their bankrolls and put one together. But they’re usually so eager to get into action that they gamble at higher stakes than their bankroll can actually afford. They also usually overestimate their own skill at the games they’re playing.

A true pro gambler has far more money in his bankroll than the average gambler would ever think is necessary.


Most professional gamblers want a fortune. They’d prefer to avoid the fame. You’ll see plenty of exceptions on the poker circuit, but you’ll find plenty of serious poker pros who aren’t interested in becoming poker celebs.

You can make money in poker in multiple ways, and one of those ways is by becoming famous enough that you earn money from endorsement deals with cardrooms and casinos. Some pros also get their fans to bankroll them so that they can play for bigger stakes than they could otherwise afford.

Some other gamblers must keep a low profile. Card counters, for example, can’t win if the casino knows who they are. So, they avoid publicity unless they publish a book.

And a lot of blackjack writers are writing under a pseudonym and don’t include author photos in their books.


Conclusion
Professional gamblers do things and think about things dramatically differently from the way you and I do. Most people don’t have the temperament to go pro, but if you do, be prepared to learn how to think differently and take different actions.

If you don’t, you have little chance of success.