Hey guys! It’s TTR here. So as some of you already know, this week a player from Russia won €150 000 at TTR Caisno. I contacted him and asked to share a story of this huge winning session. Hope you’ll enjoy. Everything below is written on behalf of a player.

Let me begin with the 10 million rubles (€160.000) win at Triobet casino. Unfortunately, I managed to withdraw only half of the sum and lost another half within several days while I was waiting for the withdrawal. But €80.000 were withdrawn in 3-4 days after the win. I took off for Thailand for winter not long after that. It is only natural that I didn’t stop gambling, even Thailand couldn’t help me with that. In a week or two, I decided to play again, this time at Loki casino, and lost like €50.000 in KOI within a single night. After that I received cashback, but it was a failure so I decided to make several small deposits with the hope of winning my money back in Princess, and she didn’t keep me waiting long. Probably, many Loki casino players have seen a win of 4 million rubles (€63.500) among the top wins. It was 4 Wild reels and 3 KOI symbols on the 4th reel with the max bet of 20.000 rubles (€317).

Nothing interesting was going after that, I played occasionally, had some small wins and loses but nothing major.

I won an iPhone and a trip to Thailand in a New Year race at PlayAmo casino, but as I was in Thailand in that time, and they couldn’t deliver the iPhone to this country, the prize was awarded as money into my balance. Obviously, I played with that money and won about $15.000.

After that, I decided to gamble at TTR Casino, made a deposit of €900 (it was a day before I won big) and caught incredible upstreak. Almost all games were paying, most of the time I was playing my favorite games, KOI and Aliens. It took me about 2 hours to win $33.000 and I requested a withdrawal of $10.000 which is a daily limit at TTR Casino. So I had $23.000 left in my balance. I took a break but wanted to continue gambling so I decided to play Aliens a bit more, obviously with the max bet of $150, but my luck had run out and I lost all without a single bonus game. I figured it was okay because I made $9.000 profit which was not bad at all. Stilll, I wanted to return €23.000 I had lost and I expected Aliens to pay me back.

This thought was with me on the next day and I deposited another €1.500 but I decided to raise my balance before playing Aliens with the max bet. I tried Voodoo with €10 bet but lost these €1.500 really quickly, so I made another deposit of €1.500, lost almost everything playing Voodoo when I realized Voodoo wasn’t a good option for that day and decided to try another slot. So I deposited another €1.500. 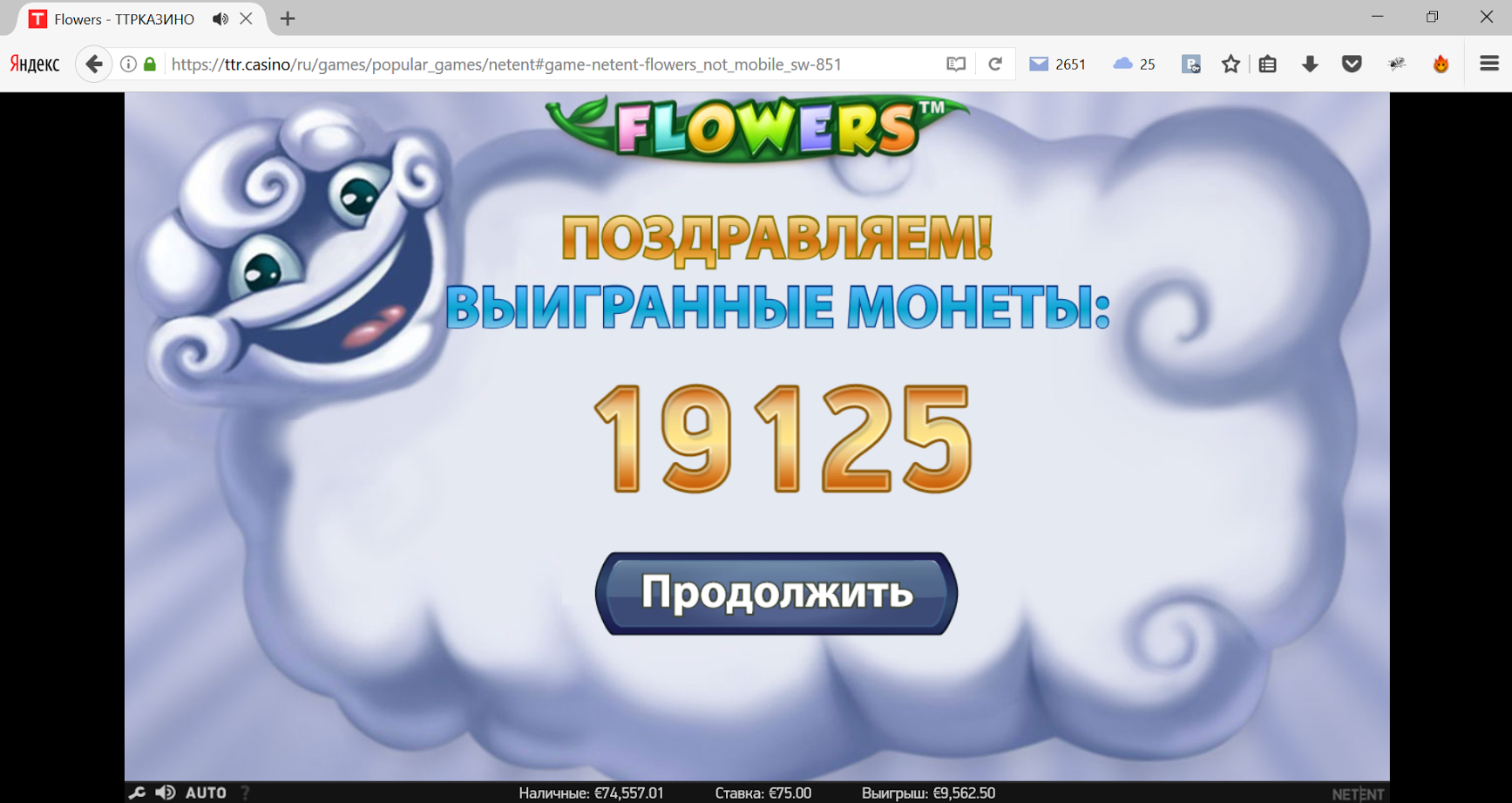 Every game was paying me at the max bet. I didn’t have negative balance in any slot. Platinum Lighting gave me a bonus game after 20 – 25 spins with 2 Wilds on the 2nd and the 3rd reels and some good symbols on the 4th. This spin brought me €27.000. The whole bonus round ended up with €34.875. 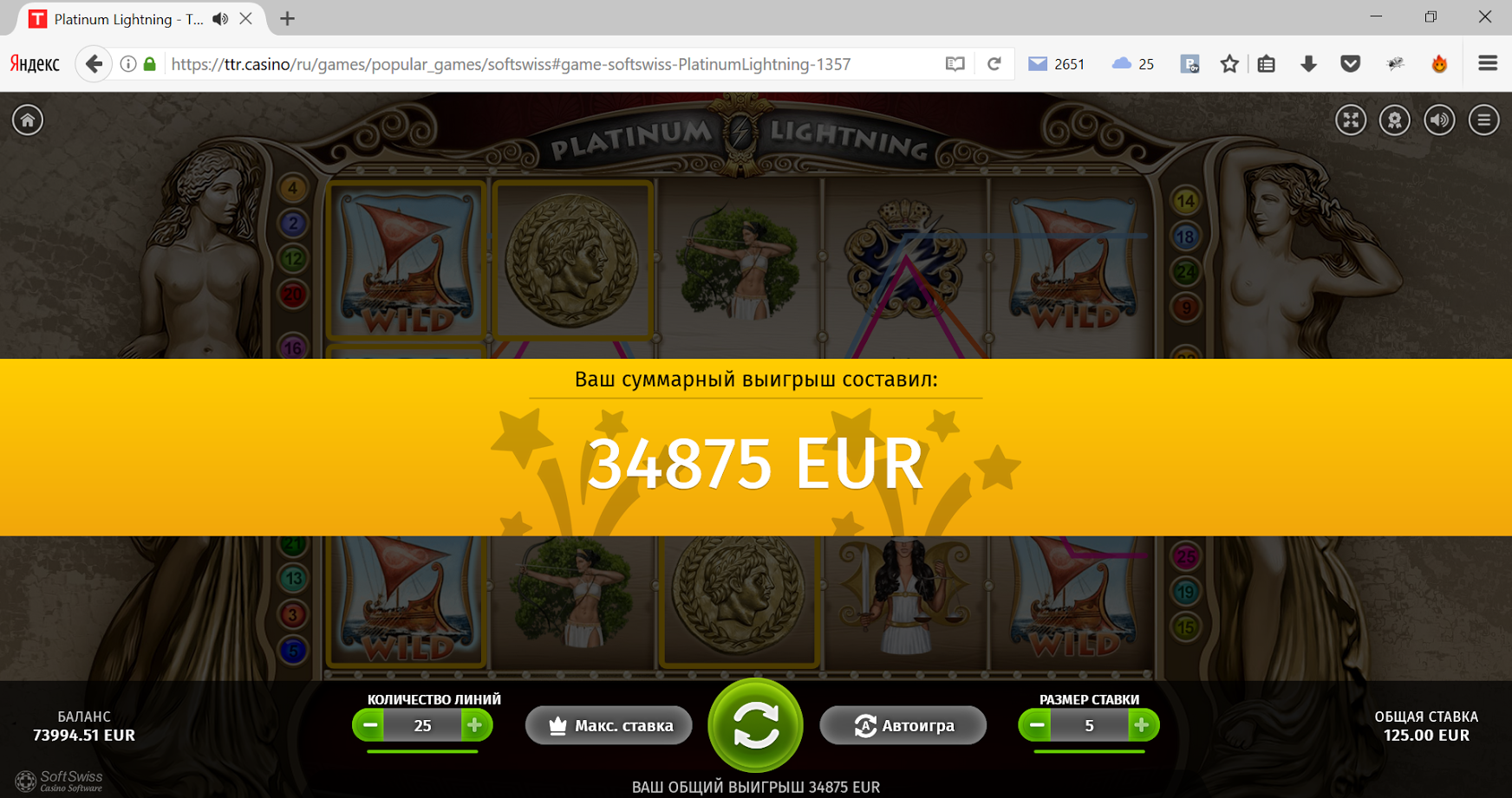 Theme Park paid something like €10.000 – 15.000 but it was giving me almost no scatters. I was counting purposefully, so it gave 2 scatters without the 3rd one 18 times in a row, but it was paying big on the lines and the bonus wheel was appearing every 30 – 50 spins. 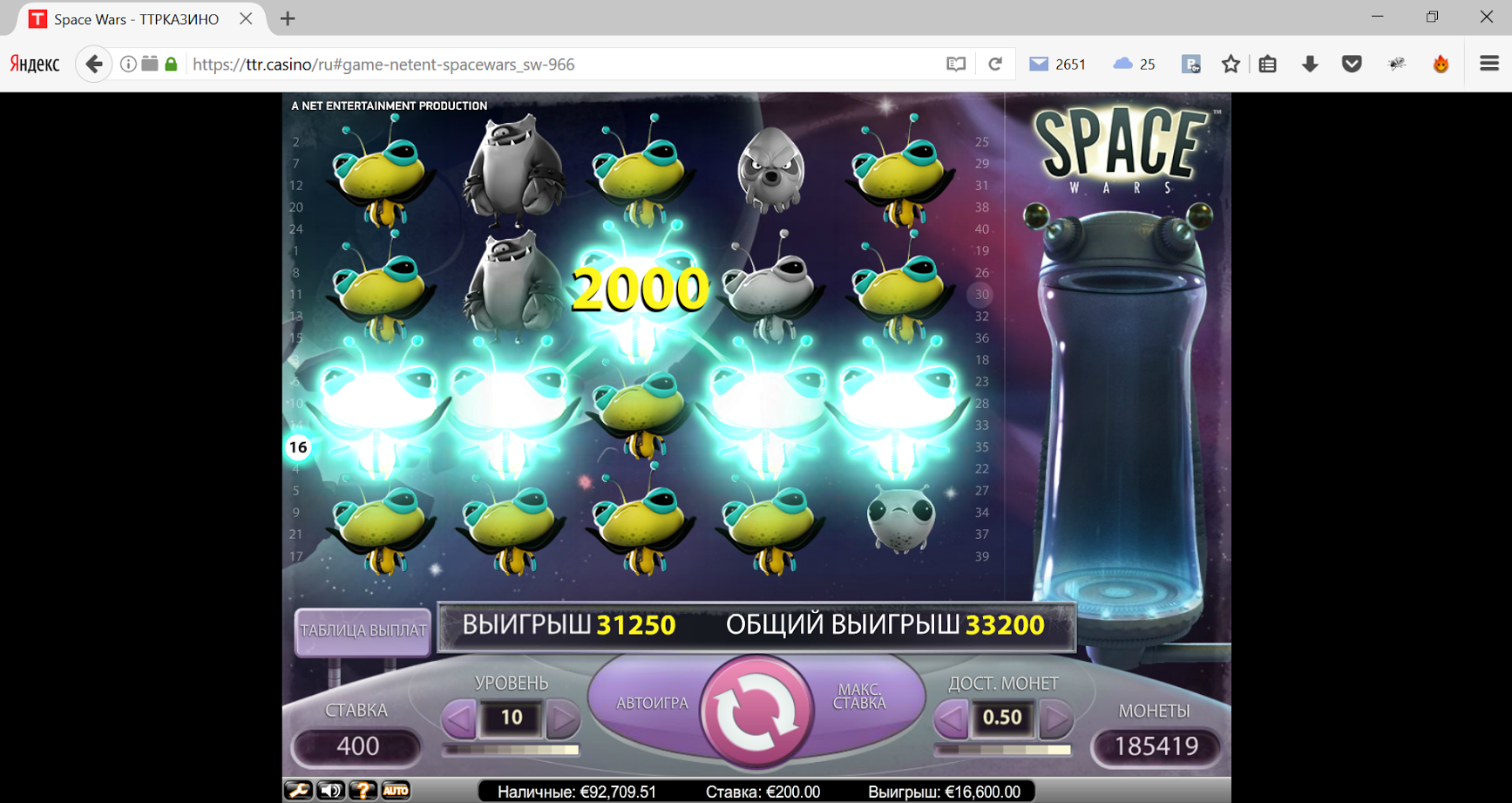 In the end, I played Divine Fortune with the progressive jackpot by NetEnt, I liked this slot much as the horses were appearing all the time paying about x50 – 60. I wanted to win Mega Jackpot, it was more than €20.000 at that time, but I couldn’t get enough coins on the bonus game, I won the other jackpots 2 times but it was only x20 for my bet. This slot paid me about €20.000.

When I had about €130.000 in my balance (€20.000 had been withdrawn by that time), I decided that it was time to stop, sent a message to TTR and blocked my account for 3 months (the withdrawal of the whole sum will take 3 months).

I had no emotions in the end, just was sitting like a zombie hitting the button because when pokies pay you have to play. It is good I haven’t lost everything cause it happens occasionally. Now, I’m waiting for the whole sum to be paid out and think how to avoid gambling at least for the 3 coming months.

P.S. I believe there is no pool in online pokies, all winnings are distributed randomly. I’m almost certain, there are no reels in online pokies at all and it makes a big difference compared to land-based pokies. A slot determines the win and displays corresponding combination upon that. There are a lot proofs.

For example, KOI has a feature where a dragon disappears from the reel and a fish pulls it up or down. This dragon can appear only with 2 other dragons and never alone. Every time the dragon appears like that, for example on the 1st reel, it means that there will be 2 more dragons and the fish will be pulling the first dragon. I have been playing KOI for a long time and it always works like that. I have never seen a dragon which disappeares from the reel without 2 other dragons. If the reels were just like in land-based pokies it would be happening quite often.

Another example is Space Wars. It is impossible for 2 different types of aliens to play on the first spin, it is only possible on the second retriggered spin. It is clear why it works like that. If 2 different types of aliens appeared on the first spin it would be impossible to know which of these types to use for the bonus spin. This is another proof showing that there are no reels, only random wins and displayed combinations.